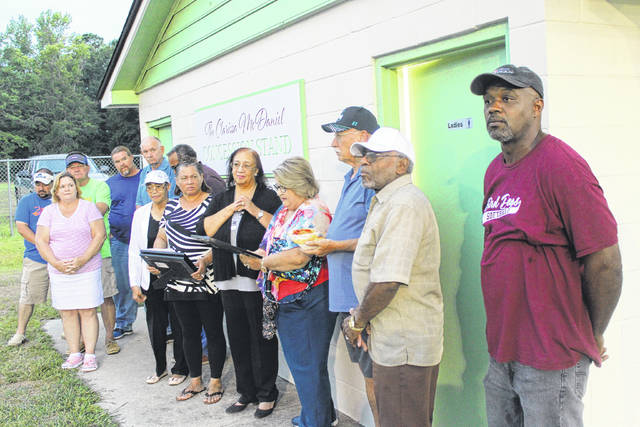 Softball supporters were honored during the recent re-dedication of the Clarissa McDaniel concession stand. The property was recently vandalized. -

GARLAND — Town officials are working to make repairs to the softball park after vandals struck the area.

The matter was discussed during a recent meeting for the Garland Board of Commissioners. Two light poles and dugouts were damaged. A vehicle also made “donuts,” which left skid marks near the walking trail. With the help of volunteers such as Leo Skinner, the town is working to get everything back to normal.

Mayor Winifred Murphy encouraged residents to report any vandalism or crime and expressed her disappointment that time and money is going towards repairs instead of activities for youths throughout Garland.

“Feel free to call 911 or call me if you don’t want to get involved,” Murphy said. “But whenever we see things that don’t seem right, the whole town needs to be responsive if you hear a lot of noise or things during the middle of the night.”

Commissioners also reported that graffiti was on the concession stand before it was repainted. Marks were made under the Clarissa McDaniel sign attached to the building. A re-dedication of the field’s concession stand was held in August in honor of McDaniel, for her contributions to local softball.

During the meeting, the town approved to spend more than $200 make light pole repairs at the park. Commissioners also voted to keep lights on from dusk to dawn to deter vandalism.

“When those light go off around 9 or 10 o’ clock, it’s completely dark out there,” Commissioner Austin Brown said after making the suggestion. “I feel like it may lead to more vandalism. Maybe, if we leave those on it would light that area up, at least til the morning.”

Calls were made to the Sampson County Sheriff’s Office to monitor the area. Although Garland suspended operations for its police department this year, Murphy encouraged people to be more vigilant around town.

“We have to rise to the occasion,” Murphy said.

For another safety matter regarding pedestrians, Murphy thanked the Sheriff’s Office and the North Carolina Highway Patrol for assisting with speeding vehicles on 701 Highway. She’s working with First Sgt. Bryan Smith, of the Sampson County branch, on the issue.

“I think there was one day last week when they were sitting up and down 701 and everywhere,” Murphy said. “They promised that they would do the best that they could for us.”

A swearing-in ceremony for the Garland Board of Commissioners is scheduled for 7 p.m. Monday, Dec. 2, at St. Stephen AME Zion Church, 51 E. Third St., Garland.

The church was selected to provide more space for community members, organizations, and the families of elected officials. Before the meeting, a public hearing for a Community Development Block Grant project and the reorganizational meeting will be held at 6 p.m. at town hall, 190 S. Church Ave., Garland.

Murphy earned her fourth term as mayor. Commissioner Austin Brown, who previously left the board but ultimately chose to file to fill his own unexpired term, is returning to the board. He will be joined by newcomers Carolyn Robinson Melvin and Barbara Ann Peterson, who will fill seats for Mary Brown, who did not run, and the late Ralph Smith.

According to unofficial results, more than 130 people came to vote for the uncontested races. Murphy was pleased with the turnout, compared to larger areas such as Clinton, which had less than 350 voters at the polls.

“We’re very pleased that people came out to express their support,” Murphy said.