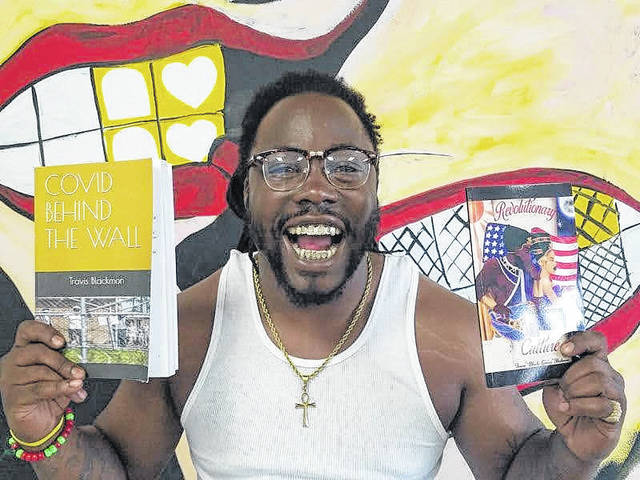 It was a crazy time, just being young, and really just coming in and out of prison. I just got to the point that I realized that I had to change, because it wasn’t about me anymore.

CLINTON — Less than a year ago Travis Blackmon found himself in an unusual predicament, and he decided that he was going to make the most of it.

Blackmon found himself in prison in the middle of a pandemic. So he started to write, and focus on working on creating a book about the situation, plus creating the Black Genius movement.

“I want people to understand that this is bigger than just the neighborhood or the block, whatever,” he said. “Just start looking at things that are actually assets in life versus things that just make you look like you have wealth.”

Blackmon said that that was how things started, and he went to prison. During this time, before prison, he was going through a lot. He has a daughter, and he did everything he could to be with her on her birthday.

“It was a crazy time, just being young, and really just coming in and out of prison. I just got to the point that I realized that I had to change, because it wasn’t about me anymore.”

“I did the best that I could to change,” he said.

He’s working on growing multiple streams of income, from his book, t-shirts and other specialty items, as well as a hot dog business and working full time.

“I have two books through Amazon, ‘COVID Behind the Wall’ and ‘Revolutionary Culture’,” said Blackmon.

The book COVID behind the Wall is a compilation of personal experience and documents while he was incarcerated.

“The documentation was to support what was really going on inside the prison system, I kept a log of everything that was going on,” he said. “When it hit, I was actually on work release. It kind of messed up my money coming home.”

He started to wonder what he was going to do, and that’s when he started pushing the books and poetry.

“I was watching the news, during the elections and things like that, and nobody is talking about what is going on in prison.”

From there they started talking about early release programs.

“I just really wanted to get it out there and be the very first person to give that perspective so when people start looking back into history, when they deal with things like swine flu, and things like that, my book will definitely come up.”

“It was me trying to recreate my image, because I didn’t want my daughter to know me for the things that landed me in prison.”

Blackmon has also just landed a co-host position at a radio station, WHUP, for a show called the Justice Connection and is pushing his clothing line as well.

“I was running low on money,” he said, of starting up the hot dog business. “I said what can I do that supports what I already have going on but also helps me generate the money?”

“I’m doing whatever I can to show people that you can come home, and have the worst reputation you want, and if it’s in you to change, it’s all about your mindset.”

Outside of the entrepreneurial dreams, Blackmon wants to help others in his position, and work on creating and improving transitional housing for those coming out to work on reducing recidivism.

“People that don’t get it right the first time, that’s where recidivism comes in.”

“…I’m not about to let my past dictate my future. It sets a mold for me to break, that is all. I cannot be enslaved by my past decisions.”