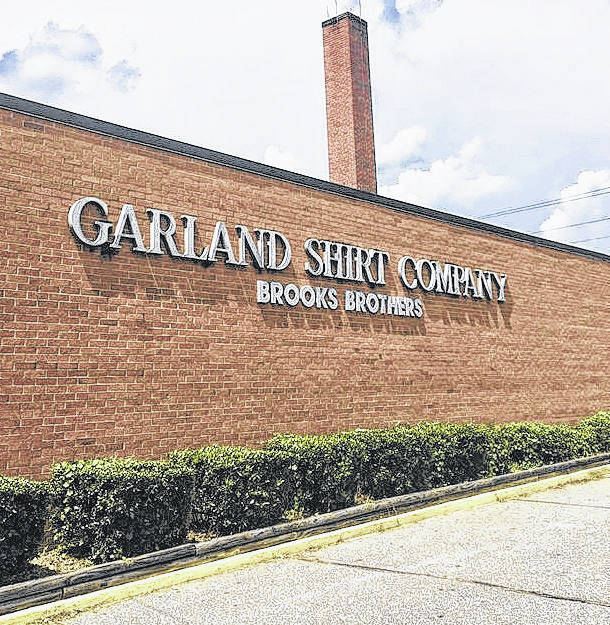 After a tumultuous year that saw a living landmark in Garland put to sleep, the cut-and-sew facility that once housed Brooks Brothers will be reawakened this summer, as the lifeblood of the southern Sampson town finds renewed life with a new tenant — one promising all jobs to be restored, and then some.

Cayenne Acquisitions Group, LLC purchased the Brooks Brothers Garland facility on June 18, 2021. Garland Apparel Group, LLC will lease and reopen the facility late summer for their cut-and-sew operations. They will continue to produce branded shirts for multiple designers and add military shirts and PPE production to their product line, according to the announcement made by the Sampson County Economic Development Commission.

In the spring of 2020, Brooks Brothers filed for bankruptcy due to the COVID-19 pandemic and financial issues, leaving close to 150 employees without jobs. Several companies showed interest as the New York-based company looked for the highest bidder, but for more than a year the building where shirts were made for U.S. presidents remained vacant, a major blow to the town of less than 700 people.

The textile industry in the U.S. has taken a significant hit over the last several decades, as more cut-and-sew companies took their manufacturing division abroad or closed. Garland Apparel Group officials said having a U.S.-based facility was key to their mission.

“The expert cut-and-sew talent (workforce) in the greater Garland area was key to our decision to locate to this region,” said Kenneth Ragland, managing member of the Garland Apparel Group LLC. “We are working with multiple entities that are seeking American-made shirts and other products. We envision this location being very important for our ability to fill purchase orders and grow our company.”

The closure of Brooks Brothers’ operations last year was a massive blow to Garland, one that loomed large over town meetings and budget talks with the sudden loss of tax base and jobs.

“We are ecstatic about the recent sale of the former Brooks Brothers plant. This is a boost for all the citizens of Garland, the many employees who have been out of work for the past year, and for the continued economic growth of our hometown,” said Garland Mayor Winifred Hill Murphy. “We are so thankful that Mr. Ragland has invested in Garland, Sampson County, and our people. We appreciate Sampson County and the State of North Carolina for helping to facilitate this sale. After the pandemic and the many gloomy challenges that the town has faced, we finally feel a ray of sunshine and see a beautiful rainbow.”

When the announcement was made about Brooks Brothers leaving town, medical supplies company Health Supply US showed interest, with the goal to make the factory into a state-of-the art domestic manufacturing campus. Brooks Brothers delayed the process as it looked for higher bidders, even as other companies had their eyes on the historic facility, which has been around since the 1950s.

“Most of all, we know this company is committed to invest in and grow a strong workforce that will continue to support apparel design companies across the U.S.,” Wooten stated. “We look forward to supporting this company as they grow and expand in our community.”

Earlier this year, Barrington noted the value of Garland’s built-in workforce in a niche market — potential once again realized by the next investor and tenant.

“We know the loss of Brooks Brothers in Garland is felt by the community and by former employees and their families,” Barrington previously stated. “Cut and sew is a niche occupation. The value of the Garland facility to new company prospects, thus far, is less on the real estate, and more on this niche workforce.”