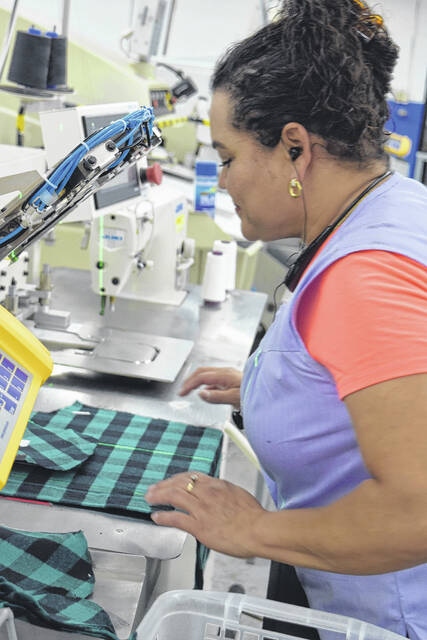 Kimberly Sandel works on setting a pocket on a project. Wednesday was her first day working on the machine. 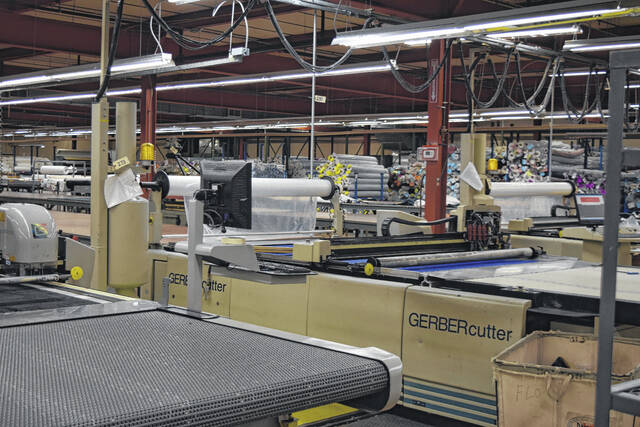 Cutting happens in a different room, where software is plugged into machines to cut specific pieces. 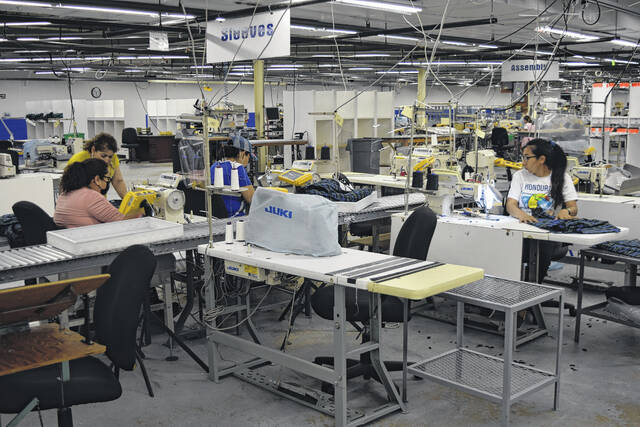 In a few more days, the entire floor will be filled with folks working.

Even the breakroom has had a fresh coat of paint. Much of the facility has been cleaned up. 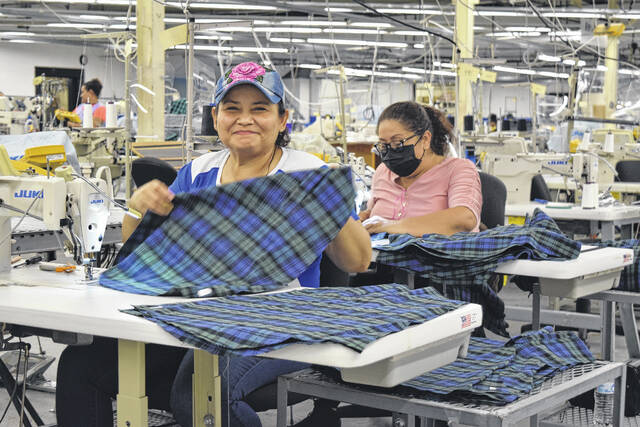 Karla Santos, in front, is all smiles at being back to work. Clara Parada is keeping busy at the station behind her.

GARLAND — Though the initial team coming into the ‘Garland shirt factory’ is small, the revitalized building is breathing new life into the lives of many.

The first shift to come into the building started Monday, and over the rest of the week and into next week more and more folks are expected to return — or start — filling the factory with the hum of progress and pride.

The official announcement came around the first of July, with the purchase of the former Brooks Brother’s Garland facility by Cayenne Acquisitions Group, LLC. Garland Apparel Group, LLC is leasing the facility, and the long term goal is to have anywhere between 220 to 240 employees.

“This is a boost for all the citizens of Garland, the many employees who have been out of work for the past year, and for the continued economic growth of our hometown,” said Garland Mayor Winifred Hill Murphy previously.

Rick Alexander is the president of Garland Apparel Group, and he’s working on “resurrecting” the building. The employees came in and painted all over the place, cleaned floors and brightened up the entire space.

“It need needed a lot of repairs and work,” he said. “Our people have done so much extra and have gone above and beyond. It’s phenomenal, the response and the atmosphere and the culture.”

They brought the Union back in, he said, and had no trouble negotiating contracts. Training opportunities with the state, community colleges, and more have all been talked about as well. They have invested in a new software system, and the college will be working on getting that training going.

Brooks Brothers filed for bankruptcy due to the COVID-19 pandemic and financial issues back in the spring of 2020. That ended up leaving close to 150 employees without jobs, being closed for over a year, and dealing a hard blow to the small town of less than 700.

Yet staff will tell you, coming back isn’t without its challenges. The pandemic has brought in numerous issues in supply chains throughout the country, and they are being impacted just like other businesses. However, they are finding themselves in Garland with a leg up in some ways — a backlog of fabrics and supplies from before the shutdown of Brooks Brother’s.

Fern Herradon, facility manager, said that coming back has been enjoyable, since he used to work there. He had left for another job and got a call asking him to return.

“They said they needed some help getting things cranked up,” said Herradon. “I’ve helped a couple of other folks here in the United State crank up, in Tennessee, Alabama and Mississippi, and New Orleans.”

Justin Henry, assistant plant manager said it’s been “absolutely wonderful” coming back into work. He’s working on shipping and receiving, production planning and sales. Right now because of the smaller staff, which will keep growing, everyone is wearing multiple hats, he said.

“There’s excitement in the air,” said Henry. “And it’s exciting to see the old faces. We have had the opportunity to bring in a lot of our former employees.”

Henry said that those folks all have smiles on their faces, which makes them happy.

“It’s good getting to bring them back,” said Henry. “We have a really good family atmosphere and that’s one of the pluses we have out here.”

That family atmosphere held over when the plant shut down, with the employees staying in touch despite the uncertain times they were in.

“One thing that Rick has done, is keep everyone like a family,” said Herradon. “They are all willing to come back. We do have some people who have gone on to bigger and better things. We understand that. If they don’t have a job they are more than welcome to come back.”

“My biggest fear was getting folks to come to work,” said Herradon. “I have seen the other facilities that I have been struggling to get people to come back to work.”

“Here we have been lucky that a lot of folks wanted to come back,” said Herradon.

“We are a very tight knit family out here and everybody enjoys working out here,” said Henry. “We are excited and ready to hit the ground running.”

They are bringing back those with seniority first, adding in those that had had experience and worked there before, and then finally taking on new talent.

Henry is from Clinton, and he’s been working out there seven years now.

“Garland has been a small gem, tucked away in Eastern North Carolina for a long time. A lot of people didn’t know what we did here before we closed down.”

Exactly what they are doing has changed with this new reopening. They are taking on business in a different way, and finding ways to compete in a challenging market. They aren’t trying to compete with a $7.99 shirt at Walmart. There’s no way they could do that. But a shirt that’s maybe selling at $129, there’s some room to work there.

He explained that orders have to go in around six months before they are needed.

“They are already sold through then, so we don’t get to start working for them until seven months from now. We have to coordinate that. Some of the other guys, if they can use our fabric or get us their fabric, we can start now.”

With this change in the economy they are seeing a slightly changed atmosphere. For one, a new company they are working with wants their product to be entirely, and literally entirely, made in the United States. Right down to the buttons on their shirts.

Brooks Brother’s had a small retail shop, and it was made there in Garland. The story offered items that could be considered factory seconds. Perhaps there was a minor imperfection, and they didn’t want to send it on to the purchaser. So it would go into that shop to get sold.

As it stands now with COVID, they aren’t entirely out of the weeds yet.

“The supply chain in in such stress because of COVID that they need us because we can do it the fastest,” said Alexander.

They have staff that are coming that have put in two weeks notices at their other jobs, and are looking towards coming back to the facility. The concern right now is making sure that they don’t “bite off more than they can chew” said Henry.

“It’s making sure that we have the proper amount of work that we need to start off,” he said.

Supply issues are still of concern, with offshore ships being held up from unloading their goods.

“But we are sitting on a sizable inventory of fabric,” said Herradon. “They are really good, nice fabrics.”

“The challenge isn’t being able to do it,” said Alexander. “It’s getting all the essential parts to do it. That’s really what we are working on.”

One thing this is bringing back for everyone is a much needed opportunity for stability, said Henry.

“We may be able to supply some of that demands that they aren’t getting today,” said Herradon. “And some of our old customers that were here are coming back.”

Another customer that is back is The Vermont Flannel Company, which prides themselves on their products being made in the US.

“There’s a lot of potential out there, a lot of opportunity,” said Herradon.

They are even in the process of bidding on a couple of military contracts, and shirts for Brooks Brothers. Their principal owner is also making suits in another facility, and that’s being discussed as an option here.

“We are considering bringing that business here, which would create more jobs,” said Alexander.

Yet things are different here from when Brooks Brothers was in the facility, Herradon said, as they don’t have to deal with corporate America, but can make decisions in house more efficiently.

“We are able to change rules that we thought were kind of dumb,” said Herradon. “Like not hiring part time folks. Some people can’t work full time. Some people are going to school.”

They are trying to make as many opportunities for folks that want to come to work as they can.

Brian Stephenson, cutting manager, said that this situation has been difficult for his family.

“For me this has been a bit of a life saver,” said Stephenson. “When the plant closed, obviously… I’m two years from retirement. But I don’t want to retire for sure. But you have to keep the wolves from the door, some how, some way.”

He had another job, and he liked the job. Problem was, the job didn’t like him, he said.

It was so physically demanding that he lost 30 pounds in three months. He stopped grilling out and enjoying things like he used to.

“If I had kept on doing that through another summer, I’m not quite sure where I would be.”

“This is a new beginning and a new challenge for us,” said Stephenson. “I think the guys we have are great guys.”

“Good people are hard to find,” he said, “especially being your boss.”

Having that relationship keeps them motivated to do better, to stick together, to push harder and harder.

“My biggest fear was getting folks to come to work,” said Herradon. “I have seen the other facilities that I have been struggling to get people to come back to work.”

“Here we have been lucky that a lot of folks wanted to come back,” said Herradon.

“I feel privileged to be one of the few that are back in here with the start-up,” he said. “We are going to succeed. We have a champion of a boss, and I think he will bring out the best in every one of us, eventually.”

He had high praise for the team, comparing it to getting a band back together.

“After that first week, I texted Rick, and I told him ‘Thank you for giving me my life back.”, said Stephenson.

To reach the facility or apply for employment, stop in and grab an application. For more information, call 910-490-9400.