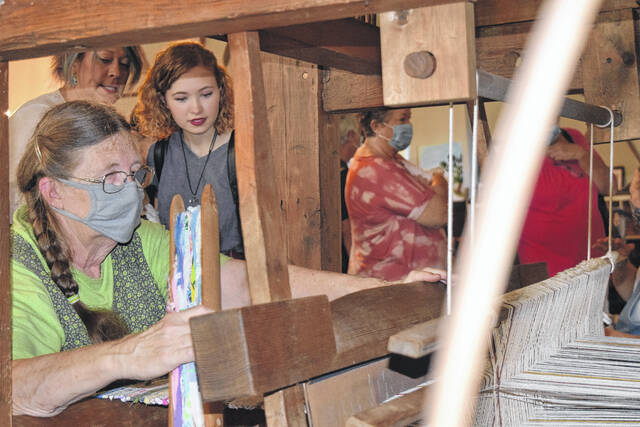 Sally Smith was weaving as a mother and daughter watched. 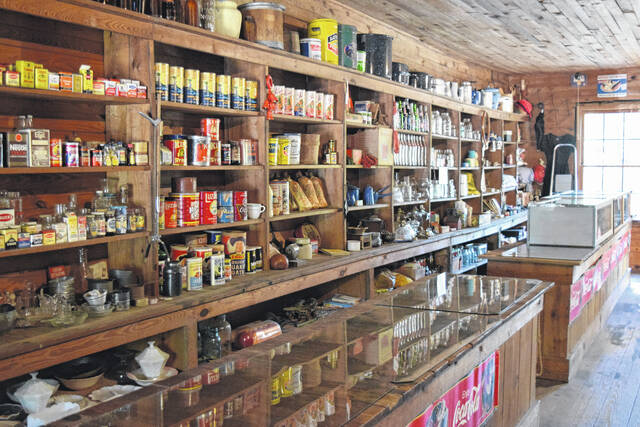 The general store had shelves lined with goods. 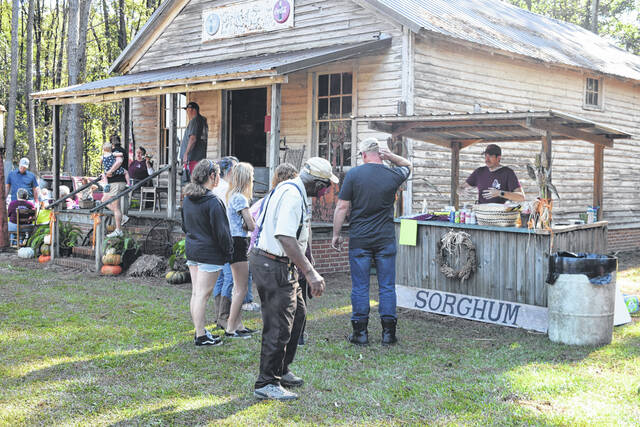 The old country store housed the Mintz Post Office from 1900-1939 and was located on the Wilmington Branch of the Atlantic Coast Line Railroad. 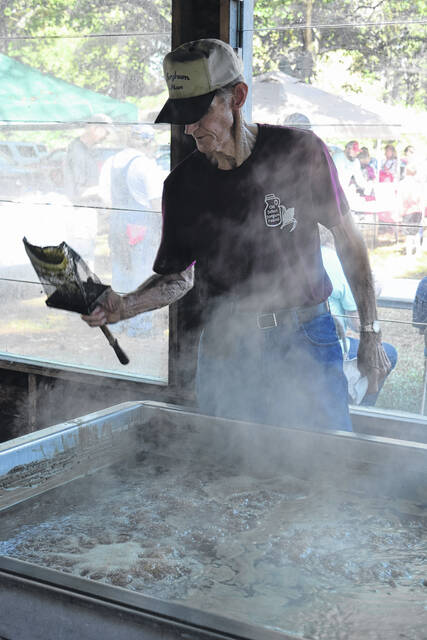 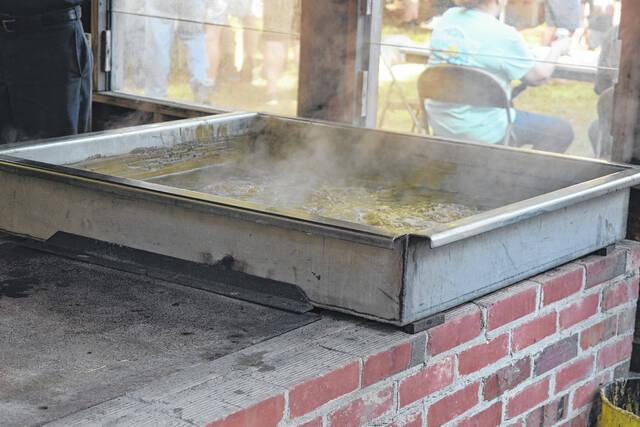 The syrup is cooked over a fire in a griddle-like pan, that’s maybe three feet square, with a raised lip. 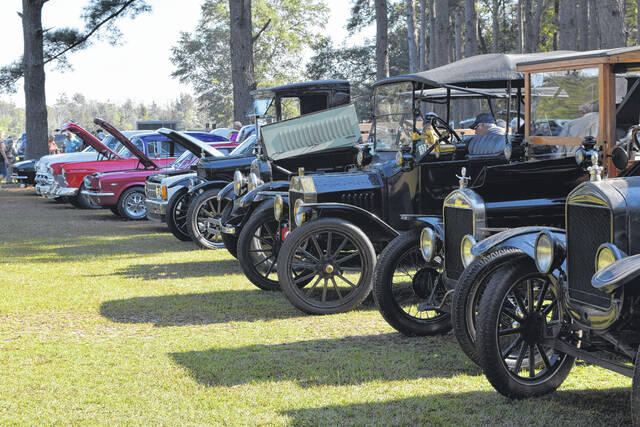 Antique cars were on display. 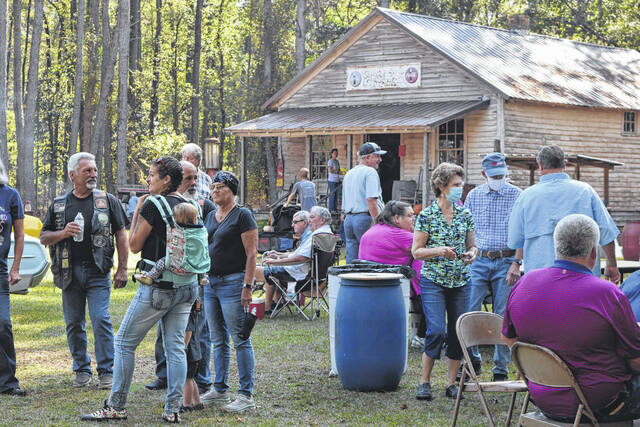 Folks milled around the grounds at the Sorghum Festival. 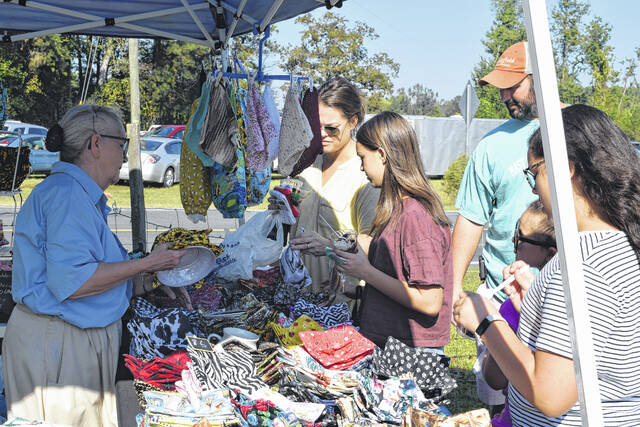 Vendors had a variety of goods on display. 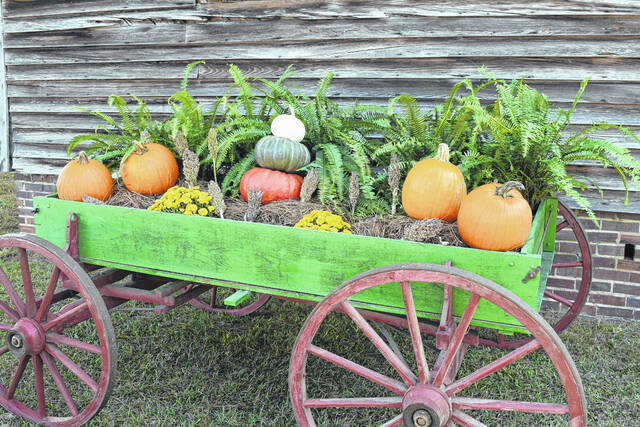 Pumpkins were in a fall display in front of the school. 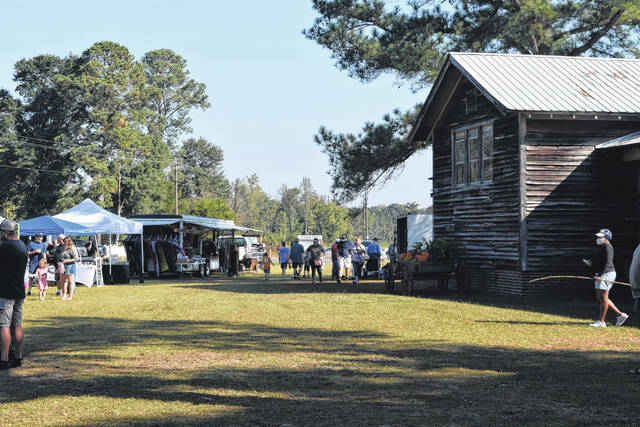 The Old School at McDaniel Crossroads was built in 1925 and served elementary school students until 1949.

ROSEBORO — Sorghum syrup wrapped up sweet summertime this weekend as folks came out to enjoy the treats.

Throughout the day Saturday sorghum was on the menu as both cookies and syrup were served up Saturday at the Old School Sorghum Festival. The fields around the McDaniels schoolhouse were full of visitors and people coming just to experience a time of yesteryear.

John Matthews, along with his wife, Annie, were busy working around the grounds. John Matthews was out cooking syrup under a shed on the beautiful day.

“It’s gone really well,” he confirmed, as he raked out plant matter from the cooking syrup.

“It was great,” said Annie. “I was amazed at the turnout and so appreciative of everybody coming.”

The syrup is cooked over a fire in a griddle like pan, that’s maybe three feet square, with a raised lip.

Over by the store, a children’s activity was set up, with a couple of folks helping with a small craft. Children were running throughout the grass and taking time to examine the antique cars that were in place on the back of the grounds between the school and the old store that was formerly a post office.

Inside, an old Coke machine sat, along with store shelves packed with different items on the walls, and long counters on the perimeter. On the back corner, there was a wrapping station, where a roll of brown paper would be used to package up purchases that were then tied with string.

In one corner, a lady stirred a black cauldron of soap, which she said wasn’t quite turning out she would have liked, due to the changes in the lard that is available.

Deborah Norris and Hazel Jean Massengill said that they go all over with soap making.

Normally they sell the soap but she said that it has been a little bit hard to get the ingredients to make it.

“They don’t raise hogs like the used to,” said Norris. “It’s just not the same as when they feed them on the farms.”

“Not like when they feed them in the pen,” said Massengill.

“It’s better if they eat off the land and stuff,” said Norris. “The fat is better on them to make homemade soap with. It makes a difference.”

They have come out multiple times before.

“We come when we can,” said Norris.

“We usually mix it the day before we go somewhere,” said Massengill. “I watched my mother make it.”

“Years ago they didn’t have the lye so they used oak ashes to get the lye,” said Norris.

The old country store housed the Mintz Post Office from 1900-1939 and was located on the Wilmington Branch of the Atlantic Coast Line Railroad.

Additionally the grounds were littered with vendors and there were exhibits galore inside the main schoolhouse.

Annie Matthews said that this year was definitely a record crowd, with folks coming as far as Edenton, but others from Raleigh and Apex. Inside was a large display of the domestic arts like sewing.

“We were most excited, and came out mainly, because it was sewing this year,” said a mother, Edna, with her daughter Carlie.

“We are really into sewing but we come every year that they have it,” she said. “They had Raggedy Ann one year and wedding dresses.”

Other times they have done comic books and other antique items. They also come for the sorghum syrup and the cookies, which they ran out of, but the ladies said that they were waiting and hanging around for the next batch.

They compared the taste to molasses.

“We were checking out the aprons so we could do some of the aprons,” said Edna.

“We do a little bit of everything,” Carlie said.

Sally Smith started to gain an interest in weaving when she was seven, in the second grade.

“A school teacher took us to a textile museum in Washington D.C. and I saw it being done,” said Smith. “Ever since then I wanted to do it.

Sewing and domestic arts where the highlights that brought in families from all over in addition to the sweet treats.

Dresses were on display in the school, along with antique sewing machines and other items like feed sacks that were used for dresses.

Record-breaking crowds were there on the campus, and Annie said that she was shocked with how many people showed up.

“I will just say that I was flabbergasted. We have never had that many people.”