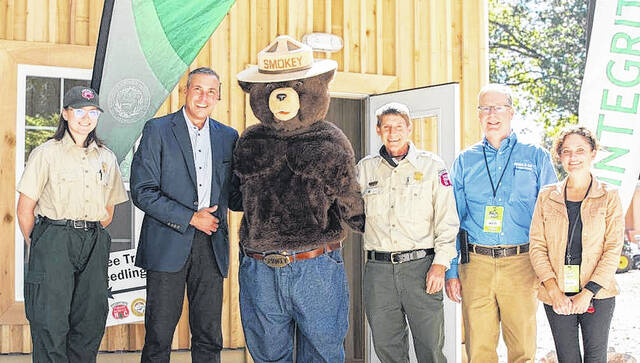 John Keppler, chairman and CEO of Enviva, and representatives from the NC Forest Service and North Carolina Department of Agriculture and Consumer Services.

RALEIGH – Agriculture Commissioner Steve Troxler led a ribbon-cutting this week at the newest building on the grounds of the N.C. State Fair in Raleigh. He officially named the building the James Robert “Bob” Stanfield Natural Resources Center in honor of the man who managed its construction and multiple buildings in Heritage Circle.

“I consider Bob a friend, but I have plenty of friends I wouldn’t ask to build cabins and buildings from reclaimed logs. He’s an expert in historic log cabin construction, and his work speaks for itself,” Troxler said. “Today I couldn’t be prouder to name this building for a man who has played a major role in the vision to expand Heritage Circle and create a connection with our conservation forest.

“We see a tremendous value we get here with the thousands of people who come through,” said association executive director Bryan Evans. “We have big plans for the exhibit — just making that connection between the natural resources, agriculture, forestry and the daily consumer attending the fair. As far as numbers, it is one of the largest outreach opportunities we have in a year’s time.”

Several other partners brought the building from idea to reality. Lumber donations from North Carolina lumber suppliers were integral to a unique design element, giving the walls a story to tell.

Within the walls of the new building, people young and old will learn about the importance of a vibrant forest sector and sustainable forest management. With every training, meeting, exhibit, educational program and outreach effort hosted in the building, the N.C. Forest Service has an opportunity to protect, manage and promote forest resources for the citizens of North Carolina.

The Stanfield Center sits in the N.C. State Fair Conservation Forest, a section of the N.C. State Fair dedicated to the N.C. forests and sponsored by Enviva, whose sustainable wood bioenergy is sourced from healthy and growing working forests in the U.S. Southeast. The forest is home to the fair’s sawmill, the lumberjack show and other Forest Service exhibits including aircraft and the 21-feet-tall talking Smokey Bear. The building gives a sense of completion to the area.

“It’s an honor to be here for the inauguration of the new Natural Resources Center, which will support public engagement about the importance of the state’s vibrant and growing forests — forests that play a critical role in mitigating climate change while providing a great positive economic impact to the State of North Carolina,” said John Keppler, Chairman and CEO of Enviva. “We at Enviva feel privileged to have our operations in North Carolina and be here today with Commissioner Troxler and the many other partners who helped to make this project a reality.

“As a company committed to sustainable sourcing and achieving net zero carbon emissions in our own operations by 2030, the new Natural Resources Center will educate thousands of visitors that pass through the doors on the importance of North Carolina’s forests and their role in local economy and environment,” Keppler added.

Enviva uses sustainably sourced, low-value wood to manufacture wood pellets, a renewable fuel source that generates electricity and heat around the world with a lower carbon footprint. With around 500 employees in North Carolina, Enviva is on a mission to displace coal, grow more trees, and fight climate change. In North Carolina, Enviva has invested about $675 million in four plants, a port terminal and a corporate office. Together these six assets, including a plant in Sampson County, support more than 1,800 jobs and contribute close to $1 billion in annual economic activity in the state.