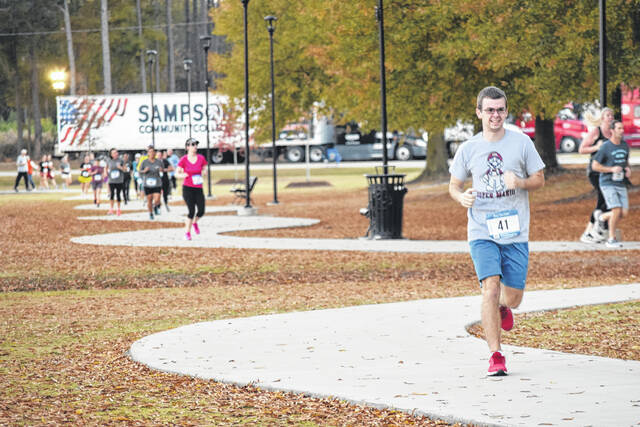 A runner was making his way through the 5K for the Sampson Shuffle, one of the festivities held in conjunction with the dedication of the Sampson East Park. 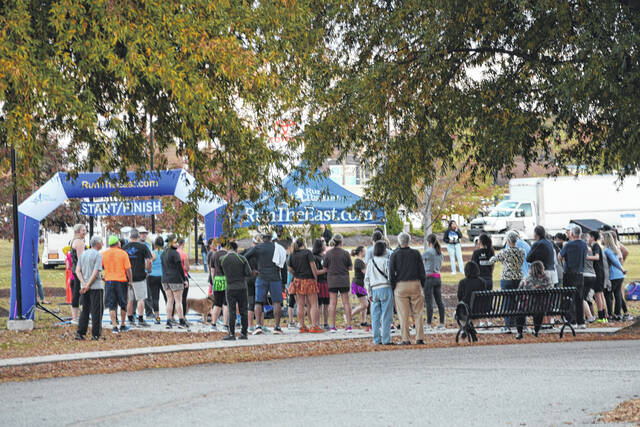 Folks gathered at the beginning of the night at the start of the race. 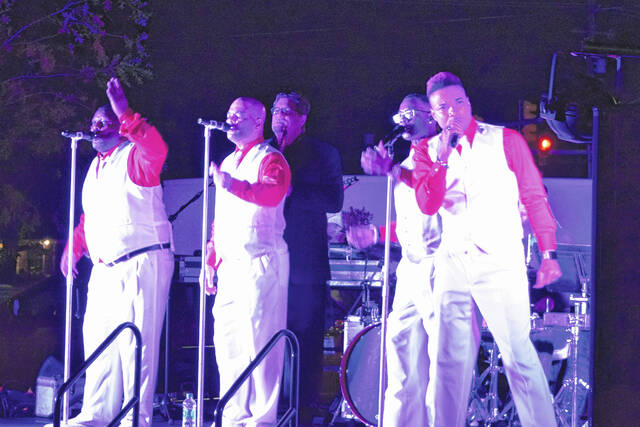 The Legacy Motown Revue Band played, kicking off the night and bringing fun in the center of the half-mile track. 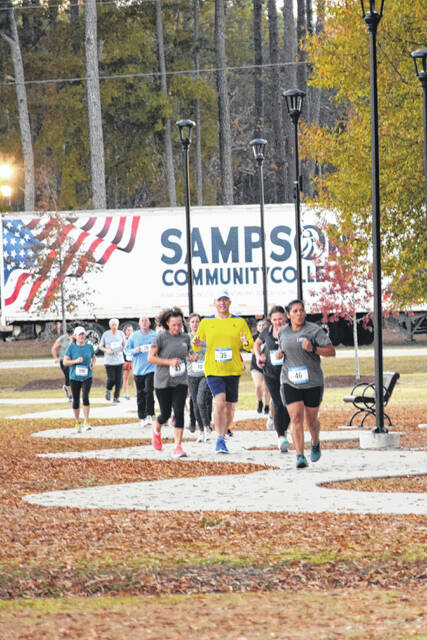 Runners and walkers were able to take a trip around the new track.

CLINTON — A race and dedication, along with music and a special video premiere, graced the grass for Celebrate Sampson on Thursday night.

Starting just before suppertime, runners were lining up to race, with both a 5K and a fun run scheduled. A Legacy Motown Revue Band played, kicking off the night and bringing fun in the center of the half mile track. The Sampson Shuffle 5k and the Fun Run wrapped up just in time for the dedication of the Sampson East Park, which is a lighted trail, field and more on the campus of Sampson Community College.

Back in 2017, the Sampson Community College Foundation Board recognized a need for more recreation and green space in the county, and committed to $500,000.

Turlington is the dean of Advancement for the college, and executive director for the Sampson Community College Foundation and headed up the Capital Campaign Committee.

The park has proven to be a great asset to the community already, say those affiliated with the project. As long as the weather is pleasant folks are usually out there walking, especially since COVID shut down gyms and indoor sports.

Now there are nice lights around the space, along with benches.

“It’s been a joy over the last few years to see so many people from all over the county making good use of this space,” she said. “None of us knew four years ago how important it would be to have outdoor spaces.”

Turlington highlighted that this was a great way to come together, meet with friends, and more, when it wasn’t possible to gather inside.

“In the next couple of years you can look for more lighting in the back trails, a bathroom complex and hopefully a performance stage too,” she said.

The Foundation Board Vice President Bill Fulton hearkened the situation to “Jeopardy James.” Fulton said that every time he would get a double Jeopardy, that James would reply “All in.”

Fulton said that both the trustees and Foundation Board members were all in when it came to this project. A plaque will be put up at some point when it is finished. It is delayed because of COVID. It has been dedicated to the memory of Billy and Catherine Starling.

“One thing I want to do on behalf of the Starling family, is thank Anne Faircloth, and the numerous contributions that were made,” said Dr. Bill Starling, the current president of the college.

Starling explained that Faircloth grew up next to his mother and father, and was like an extended member of their family, and her father was his mother’s first cousin.

The field was actually previously used for corn and soybeans, and Starling said that when they would cut it early in the year that there would be an “inundation of field mice” when the weather turned cold.

“This is all possible because of you,” said Starling to the gathered crowd.

Four food trucks came out, offering everything from fried foods, shrimp and grits on a stick, soul food, wings, hibachi and tacos. Folks were able to come out and grab a bite to eat after their race, as well as sit and listen to the band while enjoying alfresco dining. A short film was also shown that has been recently created by EdNC about Sampson County and Clinton.