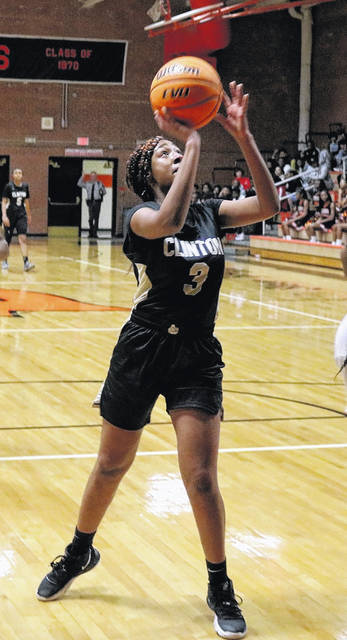 Dekyla Moore goes up for two points in the first half of Thursday’s contest at Wallace-Rose Hill. - 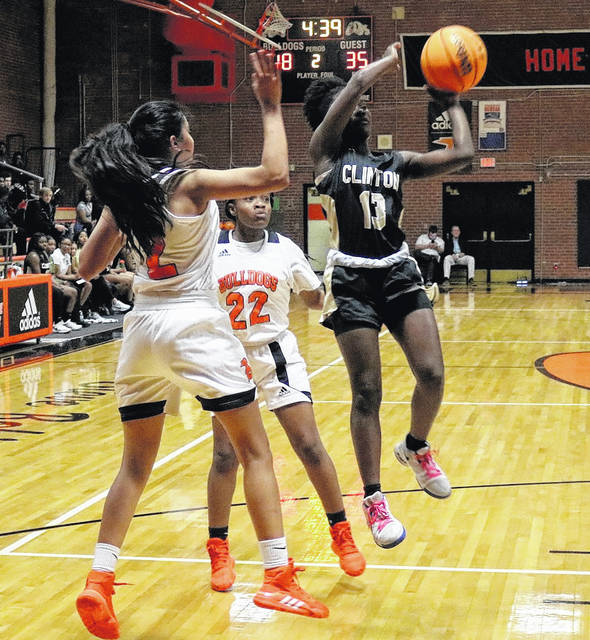 NaKeviah Evans splits a pair of defenders and releases a running floater for two points. -

The Clinton basketball teams travelled to Wallace-Rose Hill on Thursday night, renewing an old rivalry with the Bulldogs on the hardwood to continue league play. In the first match of the night, the Lady Horses completely dominated the home team, and took an impressive 80-38 victory.

The first quarter of the game was off to a blistering start as Clinton quickly hit double-digit scoring. Using a tenacious defense, the Lady Dark Horses quickly assembled a 10-point lead at 16-6 with the quarter ticking away. Their rapid pace was noteworthy from start to finish as they took a 26-14 lead at the end of the first quarter.

When play resumed in the second quarter, Clinton scored five quick points by way of a three pointer, followed by a steal and layup as their lead quickly jumped to 31-14. The Lady Bulldogs called timeout and picked up a score but Clinton continued to look impressive. Their lead hovered just under 20-points for much of the quarter before hitting that margin at 41-20 with 2:55 left before the half. From there, the Lady Dark Horses continued to force the issue as they were in total control by halftime with a 48-23 advantage.

Out of the break, Wallace-Rose Hill connected on the first five points of the half, seemingly coming out of the locker room a little revitalized. That fact, however, did little to make a significant dent in the big Clinton lead as the Lady Horses still found ways to get points and maintained an edge of around 20 points. The ferocity of Clinton’s defense was problematic for the Lady Bulldogs as turnovers turned into points for the Lady Dark Horses in the early going. That, though, didn’t last very long and neither team really lit it up throughout the duration of the quarter. By the end of the third, Wallace-Rose Hill had outscored Clinton by a slim margin and the lead stood at 56-33.

To start the fourth quarter, the Lady Horses hit a hot streak while the Lady Bulldogs hit a brick wall. Clinton scored 10-straight over the first two minutes of the quarter and behind the pace of a 12-2 run, extended their lead to 68-35.

Even Clinton’s second string team found scoring chances late in the game as they pushed the margin to a running clock with just over a minute to go. With the clock on cruise control, a pair of free throws ended the game as the Lady Horses claimed an 80-38 victory over the Lady Bulldogs.

Leading the charge for Clinton was Isa Banks with 25 points. She was closely followed by Khaliah Chestnutt with 23 points and NaKeviah Evans with 20 points. Rounding out the scoring the Lady Horses was Dekyla Moore with five points, Laniyah Smith with three points, and KaMyah and Zaniah Faison each had two points.

After the game, Clinton head coach Chris Owens said he hopes his team can continue to get better.

“We’re small in numbers this year but we’ve been looking at focusing and working together and I hope that’s something that continues,” he said. “Tonight, we were clicking tonight. We have a big game on Tuesday against a big rival in Midway. Everyone always looks forward to that game but first I’ve got to keep the girls focused on Spring Creek,” Owens concluded.

With the win, Clinton is now 7-4 overall and 2-0 in East Central Conference play. They were right back in action Friday night, hosting Spring Creek in more conference action.