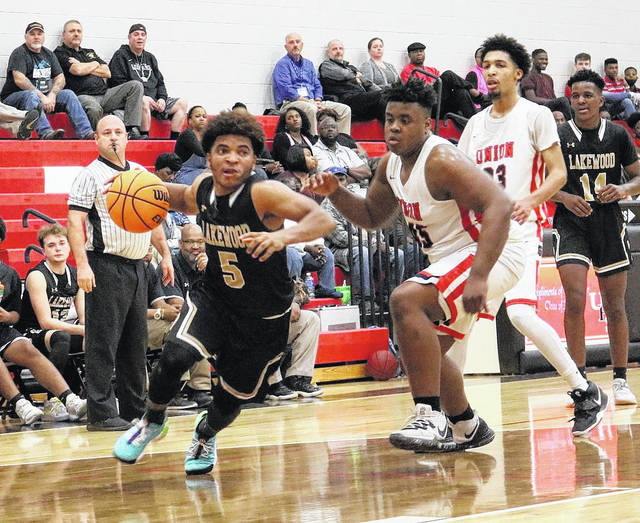 Lakewood’s Tillyon Williams rounds the corner and heads for the basket. - 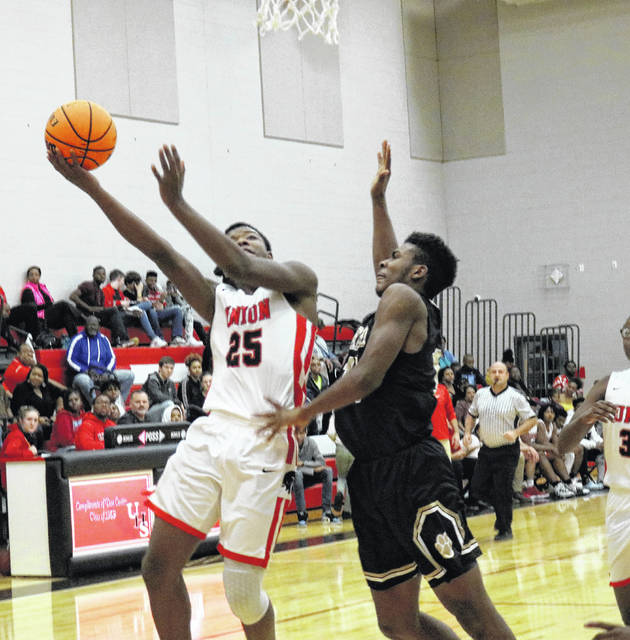 Union’s Kciredor Joyner adjusts for a layup in the lane against heavy defense from a Lakewood defender. - 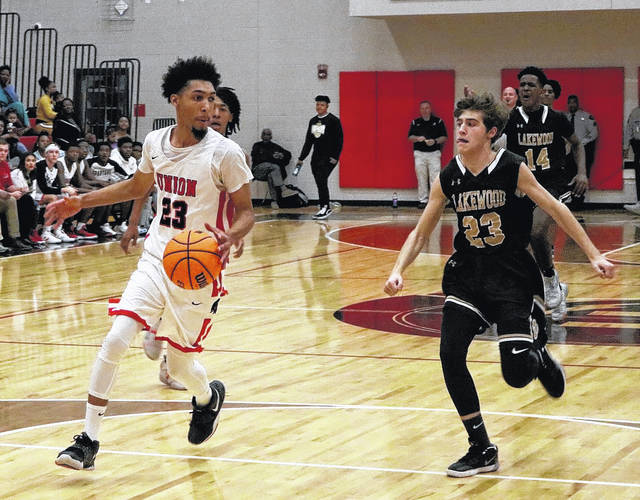 Union’s Josh Harper peeks behind him as he heads toward the basket with Lakewood’s Brenden Joyner giving chase. -

In the night cap of Friday nights action at Union, another rivalry showdown between the Spartans and the Leopards unfolded on the basketball court. The teams entered with both needing a win to hopefully get their seasons going in the right direction, and with conference play in the early stages, a win on Friday could be a big boost. When the gun smoke settled, a tight game that went wire-to-wire had ensued but it Lakewood escaping with a 61-58 victory.

In the early going, it was Lakewood that stormed out of the gate, running out to a near 10-point lead through much of the quarter. Union, though, caught fire in the latter stages of the period and came storming back. A three-ball by Josh Harper with 15.9 left in the quarter brought the tally to within 15-12, prompting a Leopards timeout. Out of the break, neither team was able to generate points and 15-12 proved to be the first quarter tally.

With action back underway in the second, the teams exchanged turnovers to get things started. As the quarter progressed, the teams swapped scores but the Spartans hit a little spurt and and tied the game up at 18-18 with 5:30 left in the first half. Union then took their first lead of the game at the 4:00 mark following a layup by Tristen Robinson, who made the score 20-19. Then, a three-ball by Jayshawn West made it 23-19 with 3:16 to go. The remainder of the half unfolded to be a tight battle with the teams slugging it out. Union, however, riding a standout performance by Harper, opened up an edge in the late stages of the quarter and led 31-27 at the break.

When play resumed, Union continued to play at a higher level. Cole Bass hit a three-pointer and another layup later, the Leopards were signaling for timeout as the Spartans had hit a 9-3 spurt to start the half and take a 40-30 lead with 5:00 to go in the quarter. When the stoppage concluded, Bass hit another layup and the lead had grown to 42-30. Lakewood finally stopped the run with a free throw but the hole was still deep. The Leopards, though, turned to a full-court press and and began to give the Spartans a fit. With the pace of the game speeding up, Lakewood methodically climbed back into contention. By the end of the quarter, they had hit their own spurt – a 13-3 run – to make it a 45-43 contest headed to the final quarter of play.

To start the fourth quarter, the game had become quite physical. Lakewood’s Tillyon Williams had just been sidelined with an injury after a hard fall and bodies were again hitting the floor. The game remained close with the teams going blow-for-blow. Williams shook off his injury at the end of the third quarter and returned to the game. Immediately he was impactful as he sank a jumper to keep the Leopards within range. Later, he sank a pair of free throws to get the Leopards back to within 52-51 with 5:05 left. After a Union turnover, the Leopards were on the free throw line again for a chance to tie or take the lead. They missed both shots and, for the moment, Union had preserved their lead. Immediately on the rebound, however, a jump ball awarded Lakewood with another possession. Another foul was called and as a result the Leopards converted pair of free throws and went back ahead 53-52 with 4:30 to go. The lead then exchanged exchanged hands a couple of times and then with 3:24 left a critical juncture of the game occurred when Harper fouled out for Union. Then, Lakewood was back ahead 56-54 with 2:52 left. Bass, though, answered for the Spartans and tied things back up on a layup with 2:06 left. The teams again traded points and the score was 58-58 with 1:02 left and the Spartans on the line for a one and one. That failed, though, leaving the score unchanged and possession back in the hands of the Leopards. On the next possession, Lakewood got a couple shot attempts off but neither went through and after a jump ball situation, Union now had possession. With 30.4 left, Union called timeout to set up a possible game winning play. After running through the plays called, the Spartans coaching staff opted for one more timeout with 11.1 on the clock. This time, the Leopards defense forced a turnover and nearly instantaneously the Spartans were also tagged with a foul with 4.8 left. Williams was the man on the line for Lakewood, shooting two shots in the double bonus. He missed the first, but the second fell through to give the Leopards a 59-58 lead. On the inbounds play, the Spartans threw the ball away on the sideline and the ball was right back in the hands of Lakewood. Again Williams was fouled and back on the line for free throws. This time, the senior sank them both and the Leopards were outfront 61-58. Union was unable to make a play and the clock hit zeroes, cementing the 61-58 Lakewood win.

Shamar Damon led the Leopards with 15 points, followed by Kaleb James with 14. Williams also got into double digits with 13.

For Union, Harper had a game-high 18 before fouling out and was followed by Bass, who had 10.

With the win, Lakewood is now 2-8 overall and 1-2 in Carolina 1A Conference play. They will be back on the court on Tuesday with a home game against Neuse Charter.

For Union, the Spartans are now 3-8 overall and 1-3 in conference play. They also return to action on Tuesday, travelling to Hobbton in another county rivalry.