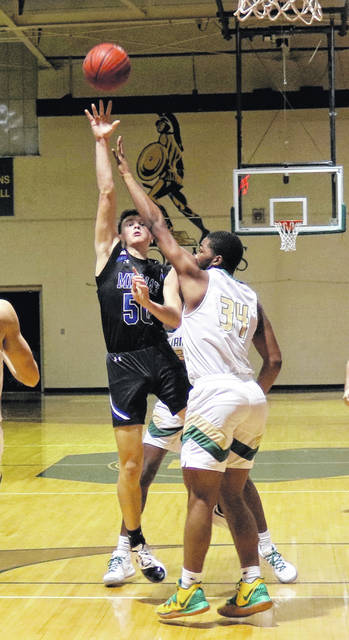 Midway’s Lane Baggett attempts a shot over a Trojans defender. - 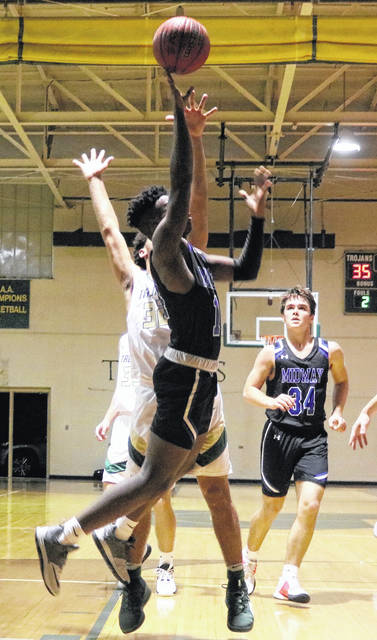 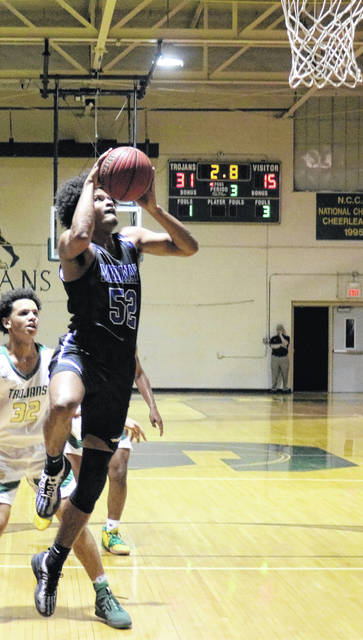 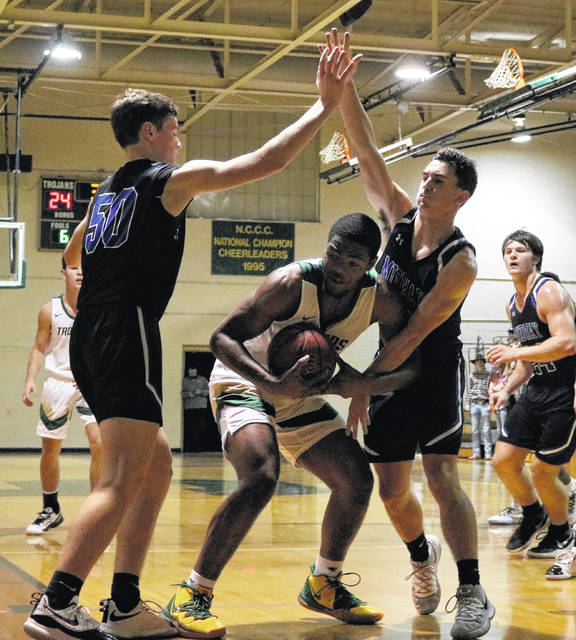 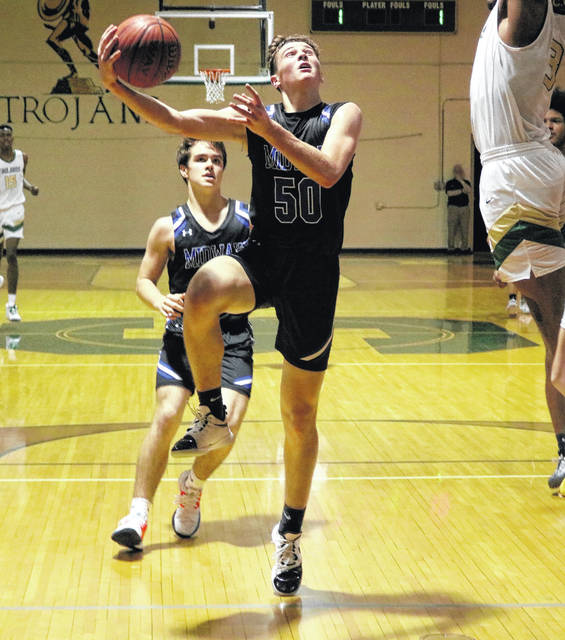 Midway’s Lane Baggett hooks in two points for the Raiders on Monday night. - -

The Midway boys basketball squad took a break from East Central Conference play on Monday night as they traveled to take on the Trojans of South Johnston High School. Unfortunately for the Raiders, things got ugly in a hurry as the Trojans ran out to a big lead early and were never really threatened again.

Though they never delivered the knockout blow and Midway hung around, South went on to get the victory, 53-44.

The Raiders found themselves in a 10-0 hole quickly. The Trojans, in just three possessions, capitalized on a pair of three balls and four point play to push their margin to 10-0 at the 5:00 mark. Unlike their opponents, points weren’t coming easy as Midway sat scoreless for nearly half the quarter.

Finally, with 4:10 on the clock, Luke Strickland stepped to the line for three free throws. The senior flushed two of them and the Raiders were finally on the board, trailing 10-2. South, though, responded with another three pointer and a dunk to run the margin to 15-2.

They pushed the limit even further with an old fashioned three-point play with 3:06 left as things were quickly getting out of hand at 18-2. Opting not to a spend a timeout, Midway could only watch as the deficit slowly climbed near the 20-point margin as threes continue to rain down from the Trojans.

The Raiders finally got their first basket with under a minute to go as Jaden Covington converted a layup under the basket. That, and Strickland’s free throws was all Midway had as South staked a 23-4 lead at the end of the first period.

In the second quarter, the Trojans cooled a bit, opening the door for the Raiders to chip away at the lead. Midway hit a small spurt throughout the quarter and got back to within 24-11 with 2:37 left in the half. Though only scoring two points to this point, the Trojans still led by double digits. With the quarter winding down, South Johnston finally ended their cold streak with a three pointer from the left side. They also scored on a late layup at the buzzer to claim a 29-13 lead at the half.

Out of the break, both teams rode the struggle bus as points continued to be few and far between. In fact, it wasn’t until a pair of Trojans free throws that yielded the first points in the third after the halfway point of the quarter. Lane Baggett finally got Midway on the board with a breakaway layup as the score settled at 31-15. The Raiders did tack on one more score before the end of the quarter on a Jamar Autry layup, but the third quarter blazes by with teams just scoring 4-2 in the third frame.

Throughout the fourth quarter, the Trojans maintained their double-digit lead but Midway did threaten to get under that margin on a couple of occasions. A three-pointer by Cameron Barefoot brought the margin to 40-29 with about 5:00 to play but South responded with a three of their own to re-extend the margin.

Later, Barefoot sunk two of three free throws and the margin was 43-31 at the 2:36 mark and timeout on the court. Then, with 1:00 to go, a three-point play by Thornton Baggett got the Raiders to within 10 at 47-37, but time was running out.

Then, with under a minute to go, Midway found it’s way to under a 10-point deficit and that’s where things would settle as the Trojans hung on for a 53-44 victory.

Leading the effort for Midway was Cameron Barefoot, who had 12 points. He was followed by Covington, who had eight, and Godwin and Thornton Baggett each with seven. Autry finished with six points and Lane Baggett and Strickland finished with two each.

There was no time to waist for the Raiders, though, as Midway was right back in action on Tuesday, traveling to take on Clinton.