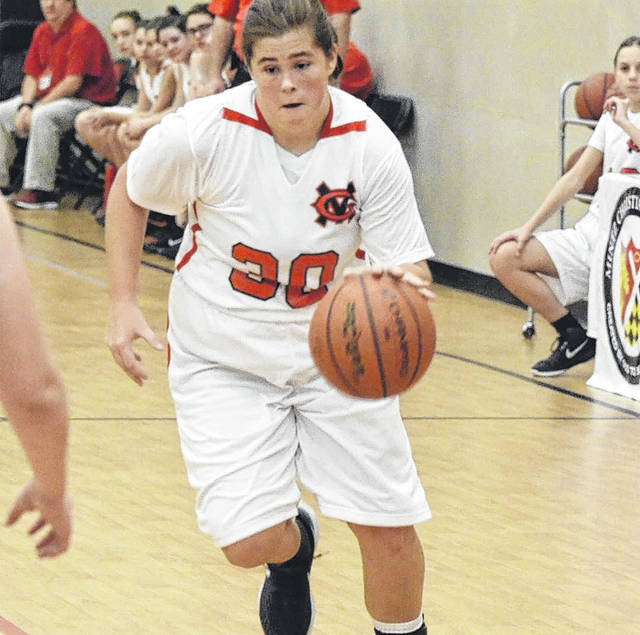 Cayden Herring looks to make a cut during the Lady Lions’ game at Temple Christian. -

The Mintz Lady Lions, who began the season 2-0, entered Friday night’s game against Temple Christian School victims of a two-game losing streak. The slump continued following this tilt as well, which saw MCA fall 49-44 to the Lady Tigers.

Friday evening’s game began slowly for the Lady Lions who could not stop Temple’s Peyton Greene, who willed the Lady Tigers to a 14-6 advantage after one quarter of action. Greene, who was 4-for-5 on field goals in the first quarter, notched nine of Temple’s 14 opening quarter points.

The slow start for the Lady Lions went unabated into the second. Doubling up the Lady Lions 16-8, Temple had laid claim to a 30-14 edge when the first half buzzer had sounded.

Underneath that sizeable Temple advantage was a glaring problem for the Lady Tigers: foul trouble. Knowing several Temple starters had three or four fouls, Mintz saw a path to at least make the game interesting.

Having to play not as aggressively in the second half, coupled with a full court press by MCA, Temple saw their 16-point lead shrink to a mere three points, 38-35, by the end of the third. Taylor Faircloth and Hailey Davis led the Lady Lions’ third quarter attack, spotting a combined 14 points.

The Mintz momentum bled over into the last remaining quarter in regulation and for a moment it looked as though the Lady Lions would steal one from the Lady Tigers. Leading 44-41 with 1:20 remaining, Mintz gave up an 8-0 run in the final minute, which proved fatal as that yielded a final score of 49-44 in Temple’s favor.

Faircloth and Davis led Mintz in scoring with each putting up 14 points. Cayden Herring rung up five points of her own. Junior Katelyn Fann, and senior Emma White led in boards for Lady Lions with Fann and White grabbing seven rebounds apiece.

Coach Dan Heinz’s crew hopes to even their record at .500, when they travel to Antioch Christian Academy on Thursday. Game time is set for after the JV boys game.