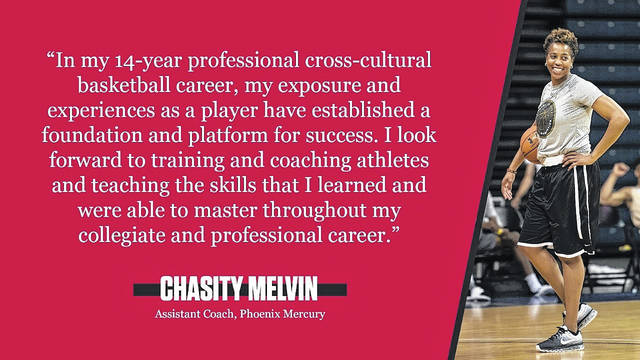 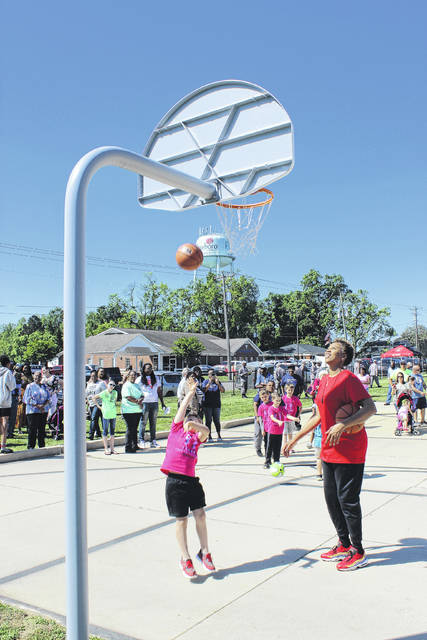 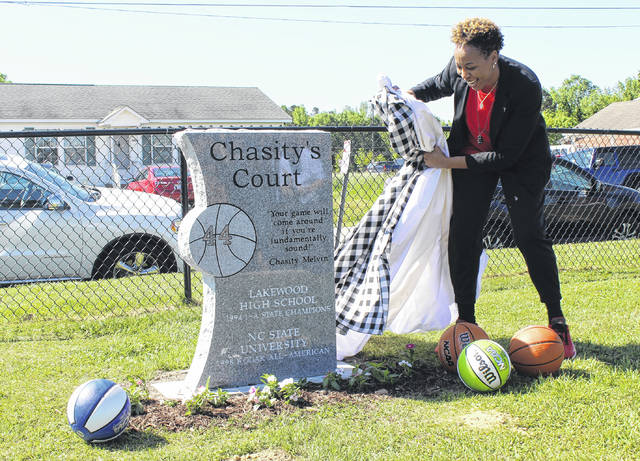 Chasity Melvin smiles while pulling the tarp off a monument dedicated to her. The revamped court in Roseboro was named in her honor last year. 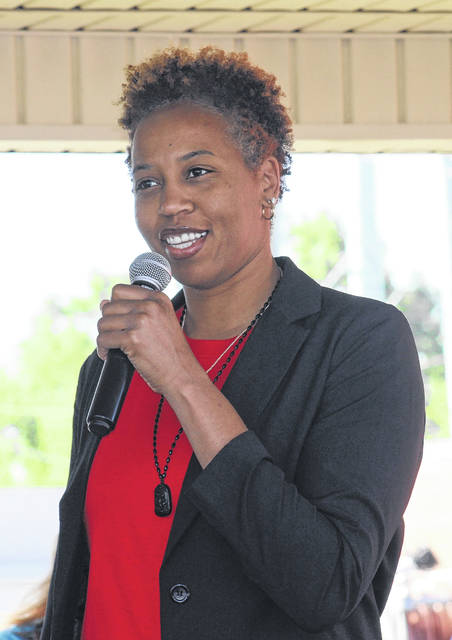 With the 2020 WNBA season now set to begin later this summer, the Phoenix Mercury rounded out its coaching staff with the hiring of 12-year WNBA veteran player and Sampson County’s own Chasity Melvin as an assistant coach.

Melvin joins Sandy Brondello’s staff alongside lead assistant coach Julie Hairgrove, whose 16-year tenure in Phoenix is the longest in the WNBA, and first-year player development coach Zach O’Brien, who last season coached with the Northern Arizona Suns of the NBA G League. Melvin assumes the role previously held by Mercury legend Penny Taylor, who steps away from coaching to focus on being a full-time mother.

A Lakewood High School graduate, Melvin led the Lady Leopards to a state championship — the fist in school history. Her journey continued at North Carolina State University and the WNBA, where she became an all-star.

During last year’s BloomFest festival in Roseboro, she was honored by her hometown when the basketball courts were renamed to “Chasity’s Court.”

“Creating opportunities for former players to grow in our game is central to our mission, and an important part of that is ensuring that we are replacing a former WNBA player on our coaching staff with another former player,” Mercury GM Jim Pitman stated. “Chasity knows what it takes to compete at the highest levels, thanks to her time in the WNBA, and already has experience coaching both the women’s and men’s games. We are excited to welcome her to the Valley and the Mercury family.”

While this will be Melvin’s first WNBA coaching stint, she is no stranger to the coaching ranks. After being accepted into the NBA Player Development Assistant Coaches Program in 2018, she was hired by the Charlotte Hornets to be an assistant coach for the team’s G-League affiliate, the Greensboro Swarm, becoming the first female coach within the Hornets’ organization. Following one season with the Swarm, Melvin was hired as an assistant coach for the Loyola University (Maryland) women’s basketball program last fall, where she spent the 2019-20 college season.

A graduate of North Carolina State, Melvin played under legendary basketball coach Kay Yow during her four years with the Wolfpack. While there, she became the first player in program history to record 2,000 career points and 1,000 rebounds. Melvin led NC State to four NCAA Tournament appearances, including a trip to the Final Four as a senior, the program’s first trip to the Final Four. She was a two-time All-ACC First Team selection, was named the conference’s Rookie of the Year and was inducted into the school’s Hall of Fame in 2014.

Following a stellar collegiate career, Melvin was selected with the 11th overall pick in the 1999 WNBA Draft by the Cleveland Rockers. Her 12-year playing career saw stints in Chicago and Washington, and in 2001 she was named a WNBA All-Star. Accumulating over 4,000 points and 2,000 rebounds in her career, Melvin’s 890 career offensive rebounds continues to rank seventh-best in WNBA history to this day.

Before going into coaching, Melvin served as an ambassador for the Kay Yow Cancer Fund as the Director of Communication. Additionally, she’s consultant for several elite AAU teams during her post-playing career and has assisted at the NBPA’s Top 100 High School Basketball Camps.

Melvin took to social media to expressed her thanks at the hiring.

“Thanks for the welcome. I am excited to be a part of the rich tradition of the @PhoenixMercury family. I look forward to getting on the court with the staff and players,” Melvin stated. “This is a great opportunity and platform for me to use my unique voice during this climate, provide positive inspiration and continue building my coaching resume. Another opportunity to give back to the game that has given so much to me. I love this game!”

Melvin, at the dedication of the court in her hometown, said she is continuing to chase her dreams, and urged young people there to do the same.

“Always keep dreaming and keep believing,” she said. “It’s funny that I got a court dedicated in my name when I’m still chasing so many goals.”

She said that she looks forward, in this newest role, to continuing her mission to teach and ensure others are put in a position for success.

“In my 14-year professional cross-cultural basketball career, my exposure and experiences as a player have established a foundation and platform for success,” Melvin stated. “I look forward to training and coaching athletes and teaching the skills that I learned and were able to master throughout my collegiate and professional career.”