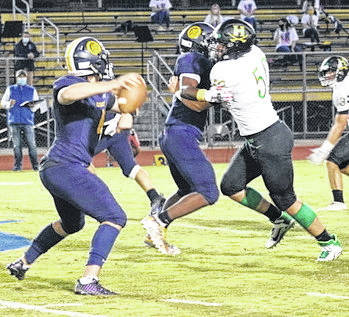 Grice Bell breaks into the backfield for a rush on the quarterback in a previous game. He was one of four defenders who notched sacks for the game. 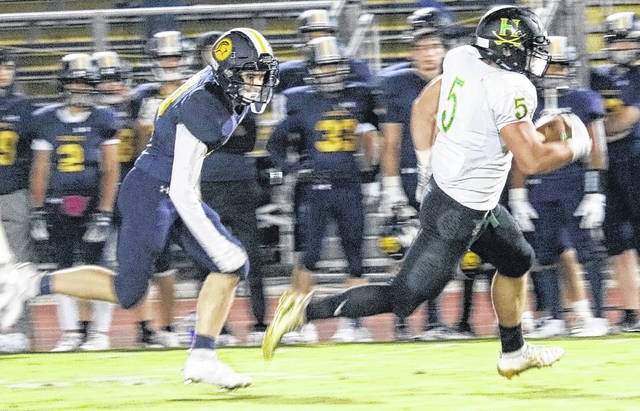 Trent Jackson runs the ball up the sideline during a previous game.

The Harrells Crusaders football team improved to 3-0 on Friday after hosting their first home football game of the 2020 season. It wasn’t without difficulty, though, as the Crusaders had to stave off a fourth quarter rally from the Carolina Bearcats to secure a narrow 42-37 victory.

Harrells took a 7-0 lead in the first quarter and grew that lead to 21-6 at the break. By halftime, the Crusaders maintained a two-score lead with a 28-13 lead.

Things got crazy in the fourth quarter when the teams combined for a total of 42 points. This offensive explosion was propelled by 24 points from the Bearcats, who strung together an offensive attack through the air. Fortunately for Harrells, though, the Crusaders also put together a stellar offensive game and scored just enough points to hang on for the 42-37 win.

The Carolina Bearcats were lethal through the air on Friday night, completing 14 of 26 pass attempts for 383 yards and four touchdowns.

Harrells coach Jason Arnette credits some of their success to a depleted Crusaders secondary, saying that a couple key defensive backs were out of the contest.

The Crusaders offensive unit, however, shined brightly, especially in their ground attack.

Devin Gardner ran the ball 25 times for 258 yards and five touchdowns while Xavier Arrington had 18 carries for 101 yards and touchdown. Defensively for the Crusaders, Grice Bell, Jaheim Murphy, Trent Jackson, and Isaac Jiminez each contributed sacks for Harrells.

“After two good weeks of defensive football, it was nice to see our offense have a breakout game,” said Arnette of the win over the Beacarts.

Up next this week for Harrells is another home game, this time against Hickory Grove Christian Academy out of Charlotte. The Lions come in with a 1-0 record after edging out a 28-27 victory over Asheville Independent School.

“This Friday will be another challenge in Hickory Grove and facing a good running back and an experienced head coach.”