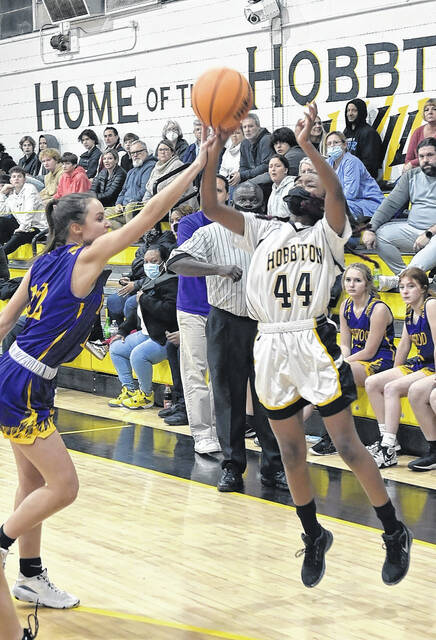 Ciara Bryant gets off one of her three-pointers. She had three on the night and finished with 17 points. 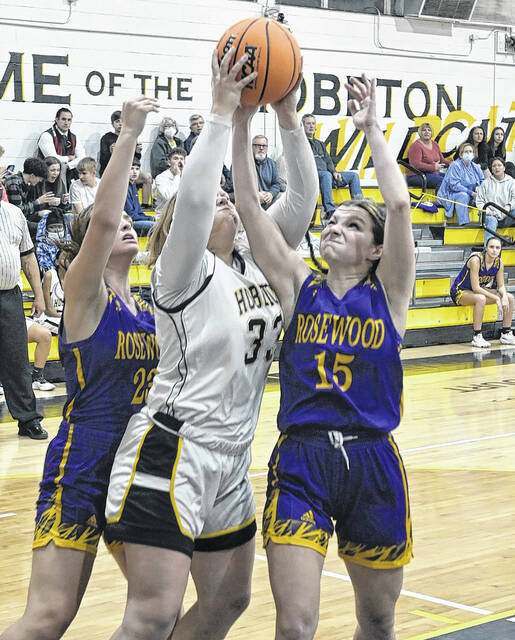 Gracie Jones goes up amongst a couple of Rosewood players. She didn’t score any points; however, she was force rebounding. 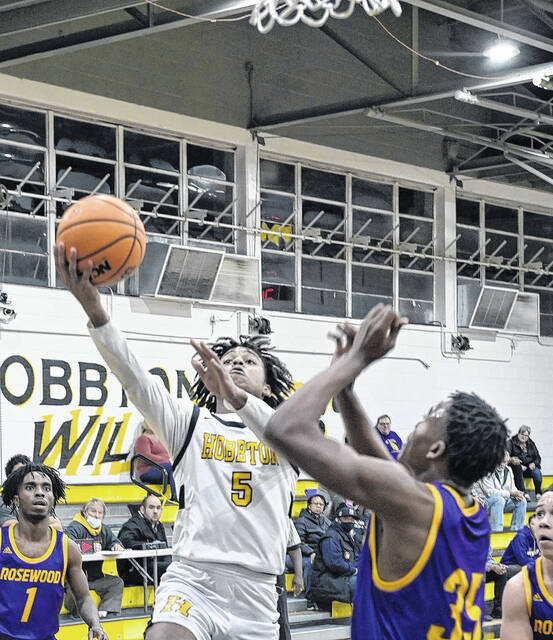 Josiah McLaurin drives for two of his 17 points. 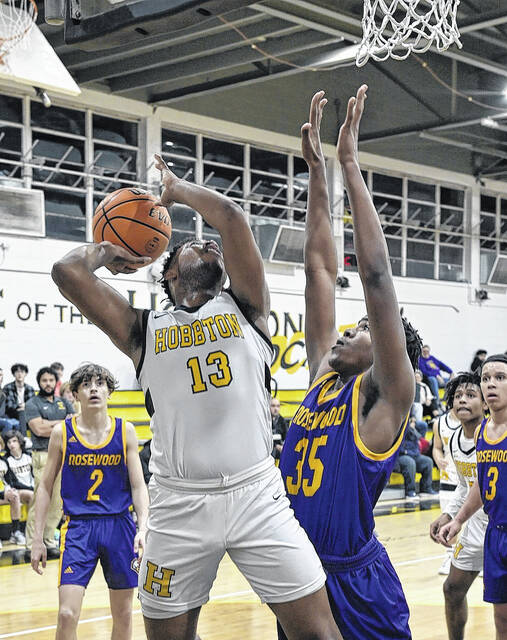 Jameek Joyner goes up in traffic for two points.

The Hobbton Wildcats hosted the Rosewood Eagles Tuesday night in what was the first conference match for the home teams. The Lady Wildcats put up a good fight, but ultimately went down 41-31. In the night cap, the Wildcat boys won an exciting game, 36-31.

In the girls’ game, the Wildcats and the Eagles played evenly tying the score four times at 15-15, 17-17, 19-19, and 23-23. The first quarter saw the Lady Wildcats end with an 8-7 lead. In the second quarter, they were up by six points at 13-7 at one time. The half ended with a tie at 15-all. The Lady Eagles mounted a comeback in the third after a scoreless first half of the quarter, the Wildcats still had a 23-21 lead. In the final frame, the Lady Wildcats faded with the Eagles getting 20 points while the Wildcats managed eight points.

Ciara Bryant led the Wildcat scoring effort with 17 points including three 3-pointers. Isabel Hepworth finished with 12 points. Gracie Jones didn’t score any points; however, she was a force on both the offensive and defensive boards rebounding.

“It was a good game,” commented Hobbton coach Timothy Thompson. “We’re missing a lot of people because of this virus. We are doing the best we can with what we have. We are still going to be OK. Like I said, it’s just a learning process. Once we stop the little mistakes, we’ll be good. We didn’t adjust well to what they were doing in the fourth quarter and we have to do better on that.”

The Wildcat boys jumped out to an 8-0 lead keeping the Eagles off the scoreboard in the first quarter and for over half the second quarter. The Wildcats never trailed in the game. The Eagles finally scored with 3:30 left in the second quarter. At the half, the Wildcats had a 17-6 lead. In the third quarter, the Eagles outscored the Wildcats by 15-12; but still trailed by eight at 29-21 after three quarters. The Eagle full court, man to man defense for most of the second half gave the Wildcats some trouble but they pushed through. The margin with about 1:30 left was down to four points. In the waning seconds, the Wildcats made good on free throws holding on to the lead.

“This is a great feeling,” commented Hobbton coach Brandon Beasley. “Rosewood has always been a team we struggled with. We’ve finally got to a point in the program where we can compete with them with our confidence at least. Rosewood has always been a great team. They play fundamentally. They do all the small things right. They take advantage of all your mistakes. We were down one of our key contributors tonight, but I think my guys and played very mature. They knew what goal we were trying to accomplish. They had their eyes set on success instead of thinking about all the negatives. They just stepped up.

”We are a team that is kind of peaking going into conference after such a tough non-conference schedule,” Beasley added. “Going forward they are not really afraid to play anybody. Formally, any time we had a big name school come through here, we would be nervous. We would have the talent to compete but we wouldn’t finish. But, tonight my guys did all the things right. We finished at the end. We talked each other up. We kept our head on our shoulders and stayed positive and we walked away with a win.”

The Wildcats JV team had a tough time with Rosewood keeping the score fairly close until the second half. Rosewood led 13-7 after first quarter, 23-17 at the half, 40-23 after three quarters and the final 47-30.

For the Wildcats, Reece Bradshaw had 15 points and Dai’vian Murrell had six points.

The varsity boys are 4-8 on the season and 1-0 in the conference.

Hobbton was scheduled to play at Neuse Charter Friday night, however the game was postponed.

“Out of precaution, Hobbton High School is pausing our basketball programs until Monday, Jan. 17th. We are in the process of rescheduling Friday’s game vs. Neuse Charter,” said Hobbton High School Athletic Director Jason Fussell. “We encourage our athletes to wear a mask upon their return.”